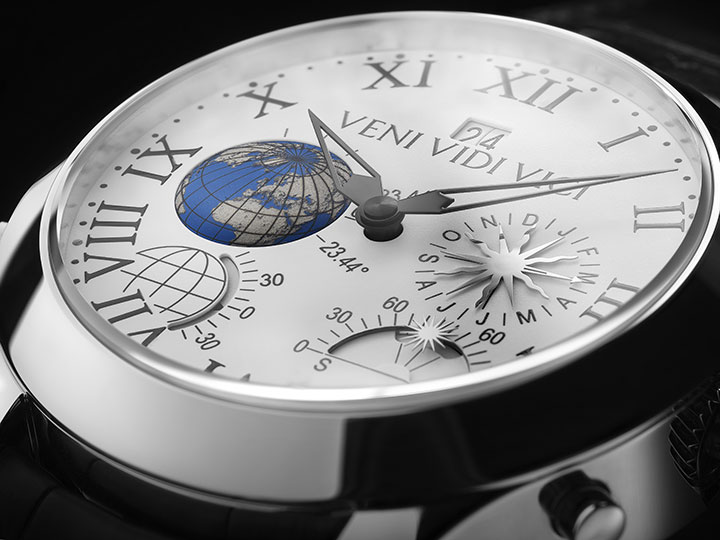 VENI VIDI VICI presents the first and only watch that unveils the subtle dance of the Sun and the Earth.

Before Man made the magnificent frescoes of Lascaux, he already knew the rhythm of the seasons, the alternation of solstices and equinoxes.

This complication indicates the height of the Sun at noon and the evolution of the solar declination.

The height of the Sun

Every day, the Sun appears above the horizon eastward. At about noon, it will reach the top of its course in the sky and then disappear under the horizon to the west.

This height depends on the day of the year and the place of observation.

The Earth revolves around the Sun and on itself; however, the Earth's axis is not parallel to the Sun's axis, it always points towards the North Star. It is the existence and maintenance of this natural inclination that causes the Earth to move in its orbit, the succession of seasons.

VENI VIDI VICI VICI, with a new complication, invites us to look up to the sky and the course of the Sun, one of the foundations of the notion of time and thus discover how the inclination of the Earth's axis will produce the succession of seasons.

A year at 45° North latitude

The mechanism models the height of the Sun and the inclination of the Earth.

The change in latitude

When the latitude changes, the Sun and the disc with the solstices and equinoxes are moving together.

The mechanism is designed for latitudes between 40° South and 60° North.

Latitude change at the summer solstice

The mechanism models the height of the Sun from 60° N to 40° S at the Summer solstice.